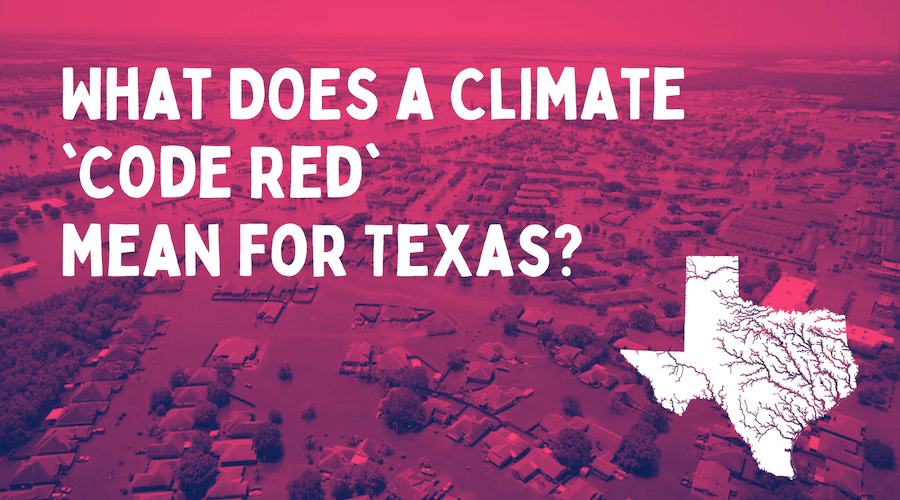 What the ‘Code-Red’ Climate Report Means for Texas

The 2021 IPCC report released this week has a clear message: just as smoking causes cancer, greenhouse gas emissions are creating a ‘code red for humanity.’

Most discussions of the report so far have rightly focused on its clarification of the global picture. But what exactly does the report mean for Texas?

Texas Will Get Hotter

Under all future scenarios laid out by the report, there will be an increase in both the intensity and frequency of extreme heat events for the region. This does not mean that freezes such as Winter Storm Uri will be a thing of the past—extreme swings in temperatures are in fact likely to increase—but the overall trend will be towards more frequent, more intense heat waves.

The data shows an overall decline in annual rainfall for the region. However, the rainfall that does occur will happen in more concentrated spurts. Winters will be wetter with Texas receiving more rain than winters in the pre-industrial era. Extreme rain events (heavy rain in one day or less) will also increase, possibly by as much as ten percent if emissions remain high.

Texas Coastal Waters Will Be Warmer, More Acidic, and Emptier

Climate models now project with high-confidence sea surface temperatures off the Texas coast will rise by at least 0.5 degrees Celsius by mid-century and from 1.0 to an astonishing 3.2 degrees by 2100 if emissions remain high. This warming will lead to acidification and marine heatwaves, both of which bring widespread consequences for the Gulf Coast’s productive but fragile ecosystems. Warmer Gulf waters will also increase sea level rise and further intensify storms—compounding problems already heightened by climate change.

The Texas Coastline Will Be Redrawn

Sea level globally is projected to rise significantly leading to more coastal flooding, erosion, and, eventually, inundation. Here IPCC projections in fact underestimate the risks for Texas where oil, gas, and groundwater extraction are creating ground subsidence which in turn increases relative sea level rise. If we don’t reach net-zero emissions by mid-century, the Texas shoreline is projected to retreat by 125 meters, the furthest among the North American regions of the report. By the end of the century shoreline retreat could be as much as 330 meters. Our recent analysis of climate impacts on the Texas Mid-Coast provides an in-depth picture of what exactly such extensive sea-level rise—and other climate impacts—could mean for Texas coastal counties.

Under all scenarios Texas is projected to become more arid. Even if we reach net-zero emissions by mid-century, models indicate agricultural and ecological drought conditions will likely increase in intensity and frequency. If emissions continue as they are, droughts will become deeper and longer over time. In this sense, the IPCC data corroborates Texas-specific studies projecting a century of megadroughts for the state.

There are further implications for Texas in the report. River flooding, for example, is likely to increase across North America—a significant problem for a state with 15 major rivers. Tropical storms along the Gulf Coast are likely to intensify with higher wind, more precipitation, and larger storm surge.

Combined these projections serve as a reminder that climate change in Texas is intrinsically tied to water—its absence, its overabundance, its ability to nurture and to end life. Organizations who’ve been working on water issues for decades, then, have unique insight on ways to mitigate and adapt to our changing circumstances. Solutions such as natural infrastructure and OneWater offer pathways forward that will help Texans live resiliently amidst our harshening reality.

We will need to dig deeper into the IPCC’s findings in the coming days and weeks, but its message for Texas is already loud, clear, and not that new: greenhouse gas emissions are transforming the state. Water is the medium through which Texas experiences this change. It’s past time we pay attention to it.

New ‘The Gulf Between’ Podcast Highlights Water Inequity in Texas