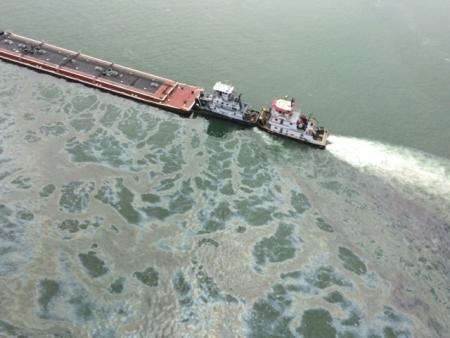 On March 22, 2014 near the Texas City Dike in Galveston Bay, a cargo ship, the Summer Wind, collided with a barge towed by the Miss Susan releasing 168,000 gallons of heavy fuel oil. The spill occurred at the point where ships can turn west to enter the Port of Texas City or continue through the Ship Channel, thus named the Texas City “Y” Oil Spill. Although the cleanup response to the spill was quick, the spill came with poor timing and the potential for devastating effects to the health of Galveston Bay.

Every spring, tens of thousands of shorebirds begin migrations through the Galveston Bay area and often stop at the Bolivar Flats Shorebird Sanctuary and neighboring Horseshoe Marsh Bird Sanctuary to feed and recover for the long migration northward. The Texas City oil spill occurred during peak shorebird migrations. On top of this, heavy winds, poor weather conditions, and currents made the cleanup difficult and widespread. Oil was blown into the Gulf of Mexico and carried to the shores of Matagorda Bay.

In addition to a wide variety of federal, state and local government agencies leading the cleanup efforts, the Galveston Bay Foundation mobilized over 1,000 volunteers to monitor the shorelines for signs of oil or oiled wildlife. Although the Ship Channel and surrounding areas have since reopened and fishermen returned (a fish consumption advisory remains), the lasting effects on the Bay ecosystem remain unrealized and will likely be felt far into the future.

Since the spill, oiled wildlife continue to wash ashore: at least 331 oiled birds, 39 dolphins, and 17 turtles.  April 1st marks the beginning of the nesting season for the endangered Kemp’s ridley sea turtle.

Unfortunately, the Texas City Y Oil Spill isn’t the only stressor to harm the health of Galveston Bay. On average, there are 275 oil spills annually in Galveston Bay. Although the spills are small in comparison to the recent Texas City Y spill, the cumulative effects of these spills in addition to other human pressures are analogous to death by 1,000 cuts:

>        In the past 60 years, Galveston Bay has lost more than 35,000 acres of wetlands (mainly due to subsidence and urbanization), and nearly 90% of the submerged grasses in West Bay.

>        Hurricane Ike wreaked havoc on oysters by destroying over 50% of the Bay’s reefs.

>        Days prior to the spill, Galveston Bay oyster harvests were closed due to a harmful algal bloom of Dinophysis. Since the spill, the closure has spread into Matagorda Bay, San Antonio Bay and Corpus Christi Bay.

>        Fish consumption advisories (for PCB and dioxin) were in effect for large portions of the Bay prior to the spill, and new advisories posted because of the spill.

>        Freshwater inflow standards into Galveston Bay, which would help to dilute some of the negative effects of the oil spill, are inadequate to keep the Bay healthy.

However, there is good news. Galveston Bay is resilient. It remains the second most productive estuary behind the Chesapeake Bay and supports a robust economy through tourism, recreation, fisheries, and industry. As Texans, we have the opportunity to take action to restore the bay. Speak up for the Bay by contacting your state and local officials, and writing letters to the editor or local newsletters. Participate in Galveston Bay Foundation’s Bay Day on April 26 to learn more about the values of the ecosystem. Bay Day at Kemah Boardwalk is a free event that features hands-on, interactive exhibits, activities and demonstrations that emphasize the beauty and value of Galveston Bay. We hope you can join us!