The proposed massive Marvin Nichols dam and reservoir in Northeast Texas is a prime example of the unnecessary reliance on new reservoirs and pipelines instead of water conservation. This project would result in one of the largest reservoirs in Texas, flooding over 72,000 acres of land adjacent to the Sulphur River in rural Northeast Texas. The majority of the project’s water would be piped roughly 170 miles uphill to cities in the Dallas-Fort Worth metroplex.

Almost half of the area to be flooded – 30,000 acres – is an increasingly rare type of habitat known as bottomland hardwood forests found only along rivers and streams. Over the past two hundred years, over three-quarters of East Texas’ bottomland forests have been destroyed. These wooded wetlands, nurtured by the regular ebb and flow of a free-flowing river, are one of the most biologically diverse ecosystem types in the state. Consequently, the construction of Marvin Nichols would have statewide implications for wildlife habitat, including black bear. 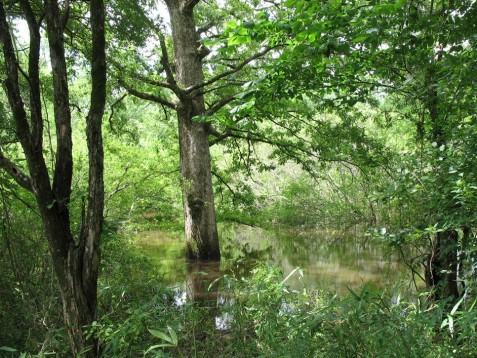 The construction of Marvin Nichols dam and reservoir would also eliminate many local jobs in farming, ranching, logging, and livestock because a significant amount of working land would be flooded by the reservoir. In addition, the reservoir would flood several family cemeteries and historic Native American sites. Because of the economic and environmental impacts, there is strong opposition to the project in the Northeast Texas area. In fact, the Regional Water Plan for Northeast Texas (Region D), which covers the area where the proposed reservoir would be built, recommends against building the dam. In light of the local opposition and clear environmental impacts the project would have, it is important to note that the Dallas-Ft. Worth area (a.k.a. North Texas Regional Water Planning area or Region C) can meet its water needs without building this dam. Many of the cities and water supply entities advocating for this project have some of the highest levels of municipal water use in Texas. Additional conservation over and above the modest levels recommended in the Region C water plan could save much or all of the water that would be provided by the Marvin Nichols dam & reservoir.

UPDATE: The Texas Water Development Board (TWDB) voted to to force Region D to include the Marvin Nichols project in their plan following unsuccessful mediation efforts, subsequent public hearings, a quantitative analysis of the reservoir’s environmental and economic impacts, and an internal environmental analysis. Although this doesn’t mean that the reservoir will actually be built, it does make the project, in part, eligible for SWIFT funding to help with planning and construction.

The question remains of what happens with the 2016 regional water plan. The water demand projections for Region C have decreased considerably since the 2011 regional plan, and recent actions and new opportunities to enhance water conservation call into question any justification for the proposed Marvin Nichols reservoir, at least within the 50-year planning horizon. This decision by TWDB will likely lead to protracted legal disputes that will complicate efforts to meet long-term water demand projections for Region C.