Many of us have fond memories of spending time swimming, boating and fishing in Texas’ lakes. From Lake Livingston in East Texas, to Lake Travis in the Hill Country or Lake Granbury in North Texas, these lakes are important destinations for countless families. But while so many of us remember the impact these “lakes” have had on our lives, many of us may not  realize that these “lakes” are actually man-made water supply reservoirs. 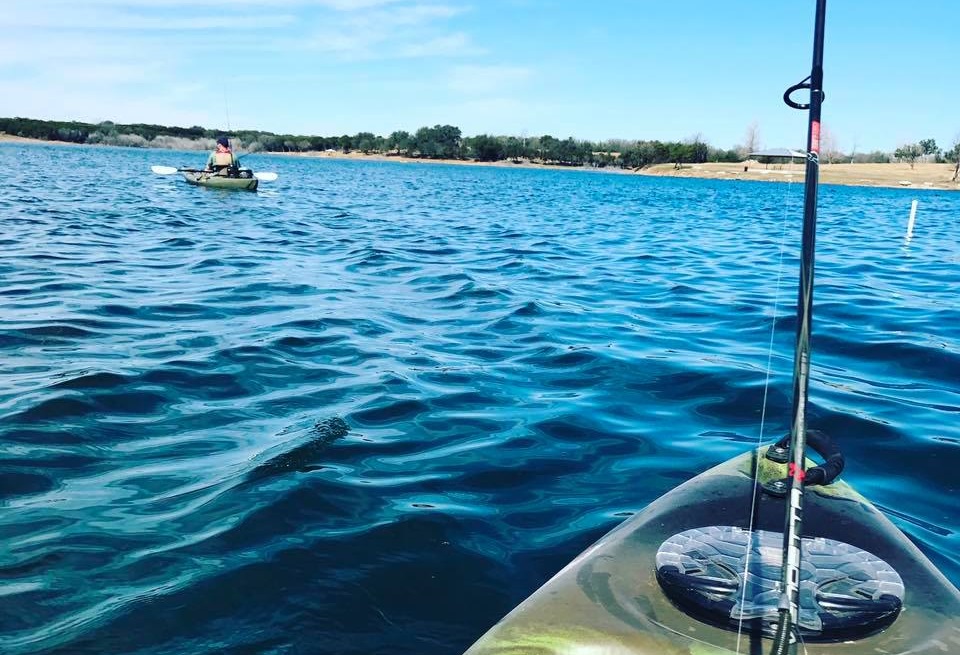 There are a total of 196 “major” reservoirs (major meaning it can hold more than 5,000 acre-feet of water) across the state of Texas. In 1913, there were four. That means Texas has been building almost two new major reservoirs per year for the last century!

There are two types of reservoirs: on-channel and off-channel reservoirs. What’s the difference? Glad you asked!

The Highland Lakes are on-channel reservoirs that were created by a series of dams. Illustration courtesy of LCRA/Community Impact 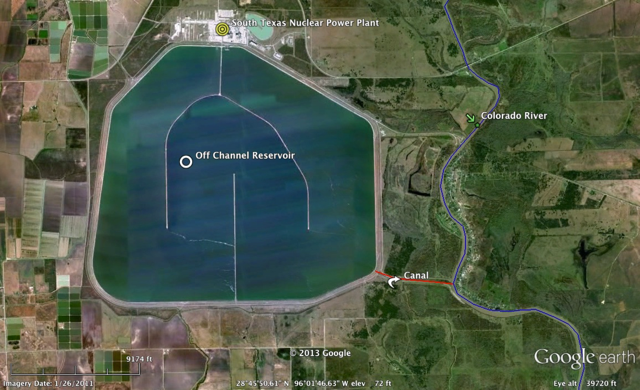 Aerial view of an off-channel reservoir at a South Texas nuclear power plant.

On top of that, off-channel reservoirs require a large plot of land, a pipeline, pump station and other various facilities to actually move the water out of the river and into the reservoir.

Why are off-channel reservoirs being built?

Many of the most convenient locations for on-channel reservoir construction have already been taken up by those 196 major reservoirs. Also, environmental considerations and permitting requirements have become more important factors as precious bottomland hardwood forest habitat and other wetlands, along with river health, have been lost to reservoir construction. An off-channel reservoir can be built near the river, instead of on the river, which gives it the flexibility of being constructed in less environmentally-sensitive areas.

Where an on-channel reservoir’s dam cuts off a river, stopping water from flowing in its normal pattern and keeping fish from swimming along their normal pathways, a true off-channel reservoir does not block the flow of the river. It also does not necessarily flood and destroy an entire riverside ecosystem, made up of critters like fish and turtles, and the beautiful trees that so often line our rivers.

While they may be better… they are still not good for the life of a river. Off-channel reservoirs can actually disrupt two potentially rich ecosystems: the river itself and the land that is flooded to create the new reservoir. 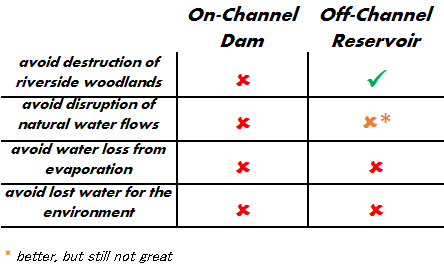 A comparison of the environmental impacts of on-channel and off-channel reservoirs. Illustration by Norman Johns.

You know that saying, take only memories and leave only footprints? Well, off-channel reservoirs can have incredibly large feet… and their footprints don’t go away. The significance of the footprint of a reservoir is affected not only by the size of the plot of land that is flooded to create the reservoir, but also by the previous uses of that land.

Off-channel reservoirs also harm the environment by disrupting the flow of the rivers from which the water is being used to piped into the reservoirs. Moving water out of rivers and into off-channel reservoirs lowers the instream flows and disrupts the environmental flow regime of a river, which can have a ripple effect that harms humans and wildlife all the way down to the Texas coast. In theory, a limited amount of water might be diverted from the river only during times of very high water flows, which would limit the adverse impact, but that mode of operating is more often the exception than the normal rule. Once there is a reservoir and a pump, the owner will try to keep the reservoir as full as possible. This can be difficult as Texas’ temperature rises, particularly during times of drought.

For example, during the most recent drought of record, studies have shown that the Highland Lakes (surface reservoirs in and near Austin) lost almost as much water per year due to evaporation as the entire city of Austin used per year. The water loss from evaporation even exceeded the city’s use in the worst drought year, 2011, by 25 percent. And while off-channel reservoirs disrupt flows less than on-channel reservoirs, they still diminish the natural flow of water. 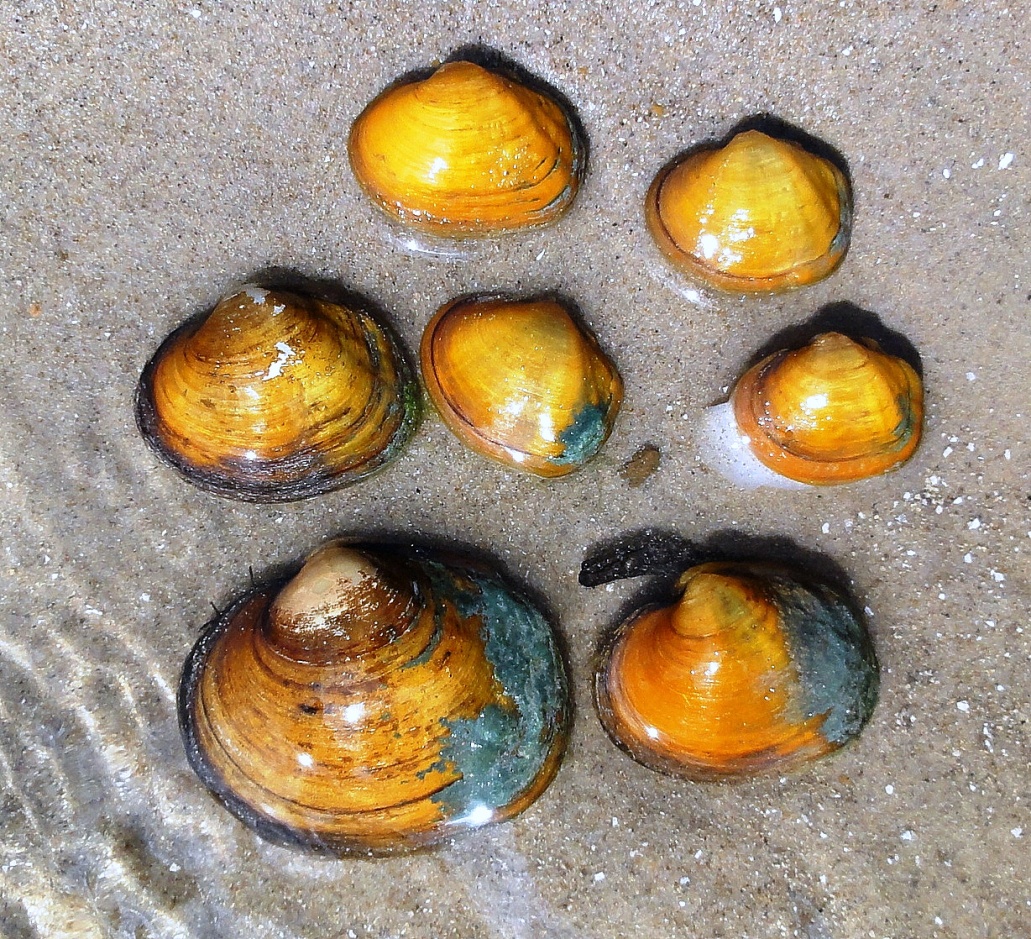 Freshwater mussels are one of many creatures threatened by off-channel reservoir construction. Photo courtesy of USFWS.

What we all must realize is that storing water is not the same as creating water. Although off-channel reservoirs are better than their on-channel counterparts, reservoirs will never be the panacea that some take them for. Without a change of mindset in which Texans realize the scarcity of this precious resource and learn how to live a water-efficient lifestyle, we risk pushing our rivers past the point of no return – and when that happens, it will be us, our economy and our wildlife that will suffer together.

Moving forward, we need to look at more efficient and balanced ways to meeting our water needs. Water conservation is the most cost-efficient way to responsibly secure new water supplies, as well as to ensure that all creatures have the water they need to thrive in their natural habitat.

About the series: Water storage options in Texas

The Texas population boom shows no signs of slowing – but we have no more water today than we did 20 years ago, or 20,000 years ago. As our state explores the many ways to manage and store water for human use, it’s important that we take a step back to understand what these options really mean for us, for wildlife, and for the future of Texas. From large reuse projects to aquifer storage and recovery, this blog series will dive deeper into each strategy, providing pros and cons, including sharing information about the potential harmful impacts on the environment when humans take water out of a river system for human use.