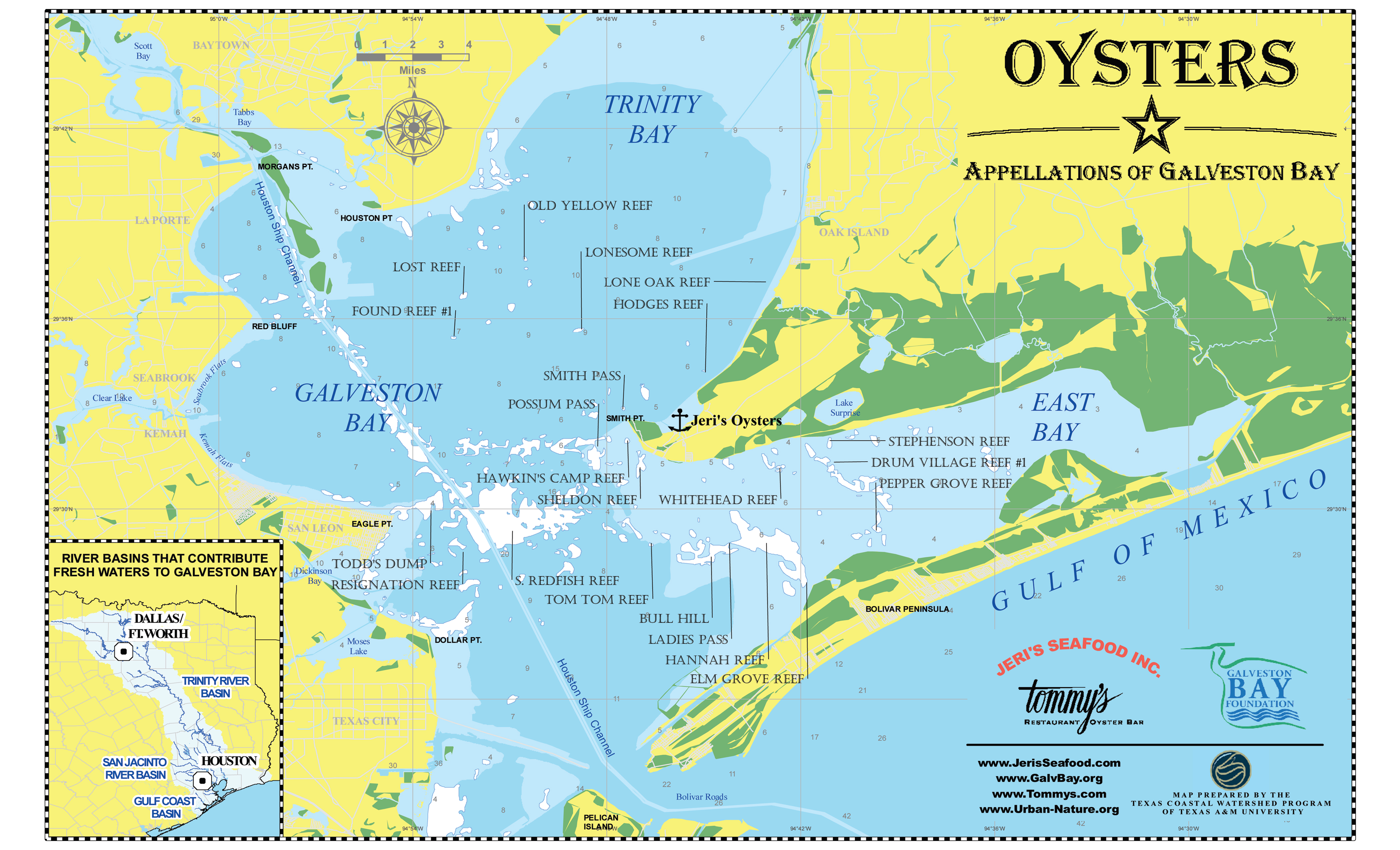 Texas’ commercial oyster season began November 1, 2014 and runs until April 30, 2015. Last year’s harvest was marked by drought, an oil spill, and a toxic algal bloom. Historically, Galveston Bay oysters accounted for about 72% of Texas total harvest by weight; however, the last 3 seasons dropped to 42%. Given these challenges, will the 2014-2015 harvests improve? There is no easy answer, but let’s take a look at what we know.

The Basics on Oysters

The Eastern oyster (Crassostrea virginica) is native to Galveston Bay. Oyster reefs were once prevalent throughout Galveston Bay, but the range has greatly declined.  Among the suite of factors behind this demise are physical factors like oyster shell mining for roads, burial by sediment such as during Hurricane Ike, and other forms of reef destruction. Reduced freshwater inflows also adversely affect oysters. Today, oyster reefs are mainly located in the middle to lower region of the Bay (Fig. 1). Reefs are maintained on both publicly and privately owned leases through oyster shell recycling and reef restoration.  Oysters require existing reefs or cultch, a mixture of oyster shell, limestone rock, and other similar material, that when placed in oyster spawning areas, provides a base for oyster spat (free-swimming larvae) to attach. Restoration programs replace cultch and help rebuild the reef that is removed during harvest. The largest oyster restoration project in Texas history occurred this year in East Galveston Bay with restoration of 180 acres of publicly owned reef. 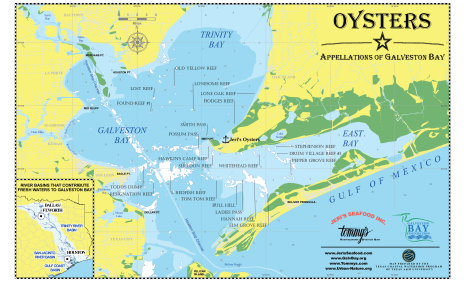 Adult oysters are sessile (can’t move), and are therefore especially susceptible to fluctuating water quality conditions. Ideal conditions for oysters include good water circulation, warm temperatures (68 to 86oF), and a moderate salinity of 10-20 parts per thousand or ppt (freshwater = 0 ppt and ocean water = 35 ppt). Depending on the conditions, oysters take about 18 months to grow from spat (free swimming larvae) to a 3-inch harvestable size. Because of this long growing period, effects of drought and poor water quality conditions can lag a couple of years making it difficult to pinpoint the effects of these stressors, or the cumulative impact if multiple stressors are available.

Oysters prefer a moderate salinity and freshwater is essential to creating and maintaining this preferred salinity gradient. For example, in June 2010 Galveston Bay experienced freshwater inflows from the San Jacinto and Trinity Rivers of about 745,000 acre-feet per month, the long-term median inflow for a month. This amount of freshwater flowing into the Bay helped produce mid-Bay (prime location of oyster reefs) salinities within the preferred 10-20 ppt range (Fig. 2A). During 2011, the combined effects of drought and water withdrawals greatly reduced freshwater inflows causing the Bay to shift to a saltier environment (Fig. 2B).  At high salinities, predators such as the oyster drill (a snail) and the disease Dermo (a parasite) increase, which lead to reduced oyster production.

Figure 2. The 2011 drought in context. (A) June 2010 is an example of an historic median flow (745,000 acre-feet per month) that helps to create a suitable salinity for oyster populations. (B) September 2011 is an example of low freshwater inflow period (160,000 acre-feet per month) that if sustained is detrimental to oyster populations. Model projections courtesy of the National Wildlife Federation.

Although freshwater inflows are not the only factor influencing oyster health, this key aspect helps maintain oyster harvests when other water quality pressures are present.  Data assessed in 2002 showed that localized sections in the Upper Texas Coast are not suitable for harvesting shellfish because of elevated bacteria concentrations. High bacteria levels pose a human health risk because oysters and other shellfish accumulate the bacteria in parts of their bodies. Several efforts are currently underway to improve water quality so that the oyster beds are routinely safe for harvesting.

What does the crystal ball say?

So, can we predict the outcome of the 2014-2015 harvest? We know oysters need existing reef for new oysters to grow, good water circulation and water quality, and adequate freshwater inflows. Oyster harvests are influenced by multiple factors including water diversions, drought and other large scale climatological events, variable fuel prices, weather, and water quality conditions.  Drought conditions for parts of the Trinity-San Jacinto-Galveston Bay watershed have lifted, fuel prices have declined, and we’re predicted to have a wetter winter. All of these point to better conditions for the 2014-2015 season than we saw last year.  However, the jury is still out until the end of the season. While we’re waiting for the outcome, go enjoy some fresh, juicy Galveston Bay oysters!

Environmental Flow Battle on the Brazos