Subsidence in the Houston-Galveston region: A new tool to learn from the past

Texans started withdrawing groundwater from Houston-Galveston area aquifers as early as at least 1836, and since then the region has been slowly sinking. Roads, buildings and entire neighborhoods have shifted and cracked as the land has collapsed beneath them, succumbing to subsidence.

In the Houston-Galveston area, subsidence is mainly a result of over-pumping groundwater: as groundwater levels have been depleted faster than the aquifers can recharge, the soil and other materials have shifted, causing the ground to seemingly swallow itself whole. Luckily, a new subsidence mapping tool created by USGS could help protect the area from sinking further.

This tool could be a valuable educational resource. Not only does it allow the region’s residents to learn from the impact that groundwater pumping has had on subsidence in the past, but it could also provide policy-makers, planners, property owners and prospective property buyers with valuable information that could help prevent future subsidence. This tool also highlights areas where subsidence puts homes and businesses at risk of flooding or foundation damage.

A look back at the problem

Since 1836, groundwater withdrawals have caused about 3,200 square miles of the Houston-Galveston area to subside more than a foot, with some areas subsiding as much as 12 to 13 feet. Over the last century, aquifers in this area have lost between 300 and 400 feet of water, leaving some of the land to collapse. 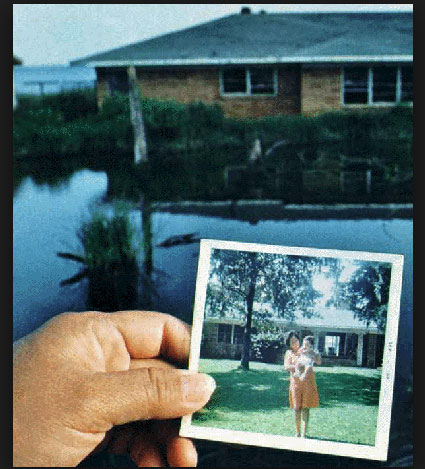 Spring Branch, where Interstate 10 and Beltway 8 meet, has dropped four feet since 1975. Jersey Village, along Route 290 and to the west of Beltway 8, is almost two feet lower than it was in 1996. And Greater Greenspoint, where Interstate 45 intersects with Beltway 8, has given up about two feet in the last decade alone, according to USGS data.

“When you lose that much, it makes an area prone to floods when they weren’t historically,” Mark Kasmarek, a hydrologist for more than 30 years with the USGS, told the Houston Chronicle.

The science of subsidence

Subsidence is caused mainly by pumping excessive amounts of groundwater out of aquifers, which has been observed in this area since 1836. Neighborhoods and infrastructure alike has been lost to subsidence in the Houston area.

The correlation between excessive pumping of water and declining water levels in many of the Gulf Coast aquifers, as well as the cumulative compaction of the soil, has been at the center of the USGS analysis since 1977. When the silt and clay layers of an aquifer compact, the aquifer’s ability to store water is reduced. This can cause long-term land use and infrastructure problems.

Subsidence, or the decrease in land-surface elevation, can partially or completely submerge land and change the course of creeks and bayous. Subsidence, coupled with impervious cover (parking lots, roads, etc.) that stops water from percolating into the ground, can cause an increase in frequency and severity of flooding in these affected areas.

In reaction to the subsidence issues across the region, the Texas Legislature created four Houston-Galveston area subsidence or conservation districts throughout the region that work to “keep the region elevated by developing ways to reduce groundwater consumption.”

Click here to learn about the region’s subsidence or conservation districts and the regulatory roles they play in preventing subsidence. These districts have been instrumental in the progress the Houston area has made by significantly reducing their groundwater pumping, though subsidence still remains a threat for the region.

The first of these districts was established in 1975; this district implemented its first groundwater regulatory plan a year later. By 1977, an extensive groundwater well-monitoring network had been established, allowing the USGS to collect water-level data that were used to create the first published water level altitude reports of the region. 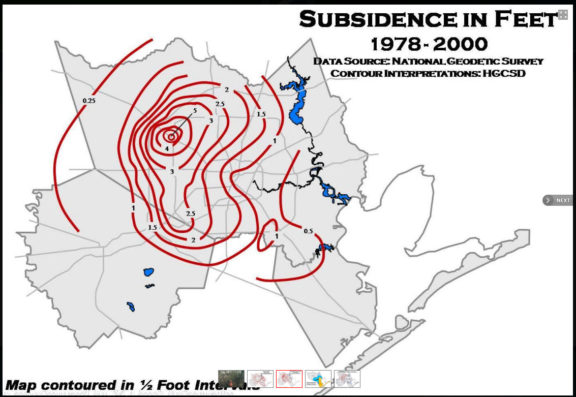 Since then, the USGS Texas Water Science Gulf Coast Program has continued to publish regional groundwater maps. To create these maps, groundwater level data are first collected and evaluated for quality control. These data are then incorporated into a geographic information system (GIS) to make regional water-level altitude and water-level change contour maps.

USGS recently presented their new interactive mapping tool at The Lone Star Groundwater Conservation District’s Gulf Coast Water Efficiency Network meeting, where they explained that it could act as an education resource for the public and decision-makers in the Houston-Galveston area. By apprising the region of its groundwater conditions and the impact water withdrawals have had on land subsidence, the tool can help inform decisions that prevent further subsidence.

This interactive tool was created with data from the regional groundwater maps that the USGS has published since 1977. The tool’s maps provide the user with detailed symbols that clearly convey water-level conditions over an 11,000 square mile region.

According USGS hydrologists, “The tool provides an interactive look at water-level changes in the Chicot, Evangeline and Jasper aquifers and land subsidence in the Houston-Galveston Region.”

With the creation of this tool and the proper management, history shows that it is possible to slow down and even halt subsidence. The Houston-Galveston area with its location, geology, and ever-increasing population can look forward to many opportunities to find new ways to adapt to the landscape in which they live and thrive.

Lawyering up for Colorado River protection