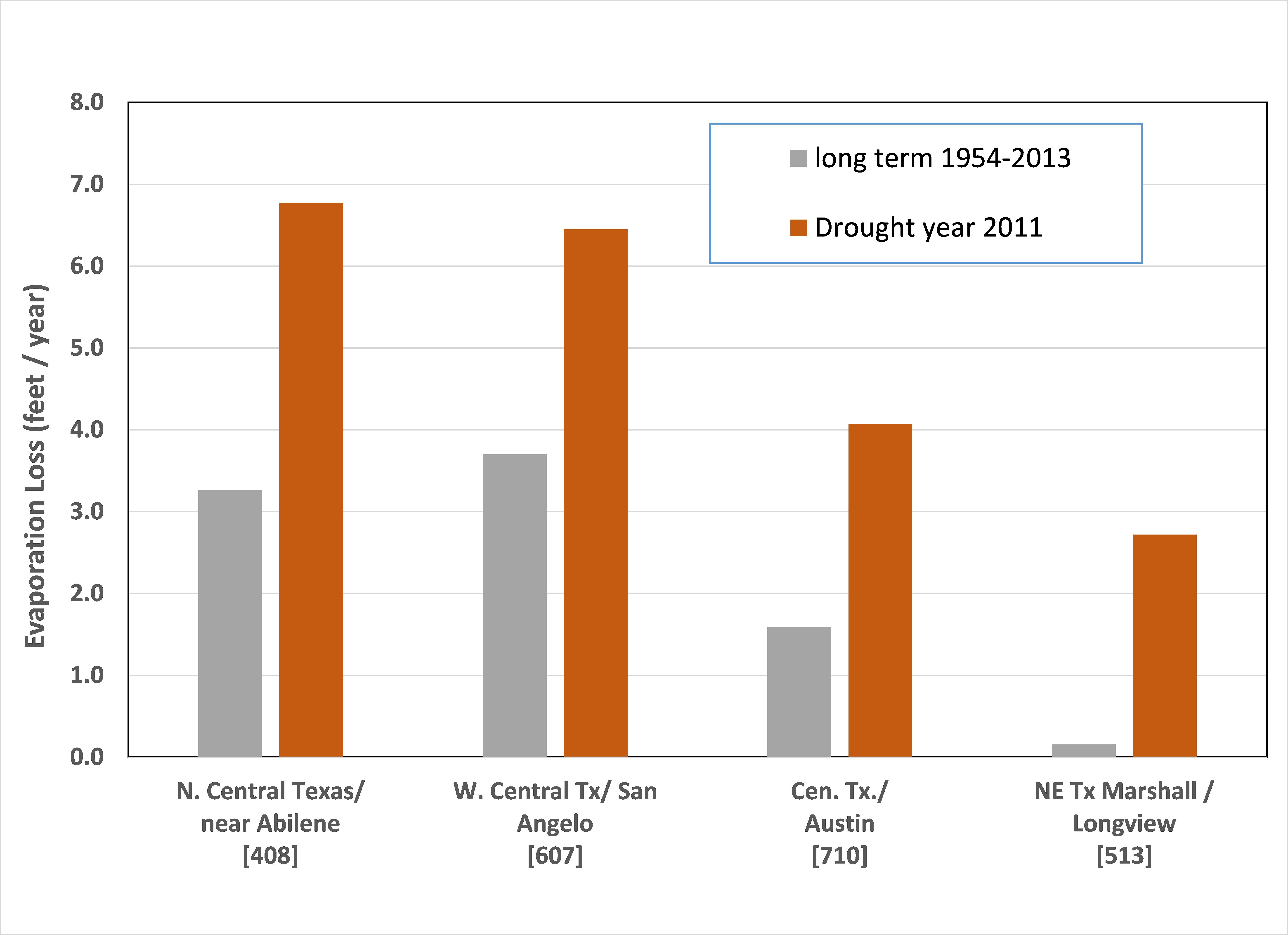 Evaporation – a loss for humans and wildlife in Texas

As the current Texas drought drags on, it’s becoming commonplace to hear about yet another lake somewhere in the state reaching a new record low level. According to the 2012 Texas State Water Plan, about 40% of our water supplies today in Texas are drawn from so-called “lakes”. With the exception of Caddo Lake on the Louisiana border, all the lakes in Texas are actually water reservoirs that result from dams built on our rivers and streams. The state’s reservoirs can be likened to a checking account and the normal deposits from river and stream flows have been extremely low due to the drought. Since we continue to withdraw our water supplies from them – no surprise – the balance is declining. However, there is another big debit taking place that you might not have been fully aware of; evaporation. So just how big a player is evaporation and what does it mean for our aquatic wildlife? Let me illustrate.

As we know, the water levels in the state’s lakes rise and fall with long term weather fluctuation. So too varies the surface area exposed to evaporation. One study estimates that Texas’ 196 largest lakes have about 2,150 square miles of surface area, on average. That is a lot of area, equal to the combined area of Bexar (San Antonio) and Dallas counties, exposed to wind and high temperature, the drivers of evaporation. The reservoirs lose tremendous amounts of water to evaporation, especially in a hot and dry Texas summer. This becomes especially apparent during a drought with limited inflows to replenish the storage.

Figure 1 below illustrates the magnitude of evaporation at several locations across Texas. The locations for which the calculations are developed are depicted on Figure 2. Figure 1 shows the net evaporation rates (gross evaporation, corrected for precipitation) on an average annual basis during the long-term period (1954-2013) and during the record-breaking drought year of 2011. This figure was constructed using evaporation and precipitation data compiled and maintained by the Texas Water Development Board.

In the severe drought year of 2011, evaporation losses ranged from nearly three feet per year in east Texas (region 513) to almost seven feet per year in west central and north central Texas (regions 607 & 408). Yes, that means that a lake in these more arid regions of Texas would have dropped nearly seven feet just due to evaporation, without any human water supply withdrawals. It should be noted that for the two western locations shown (regions 408 and 607) the long-term average annual evaporation is between three and four feet per year, greater than that in east Texas during the extreme conditions of 2011. Even higher losses, both in the long-term and during extreme conditions, occur in far western areas of the state. 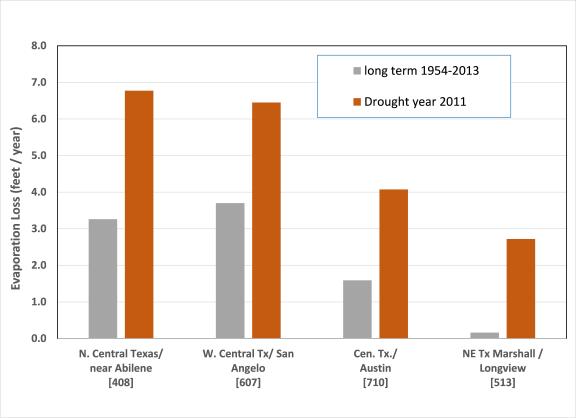 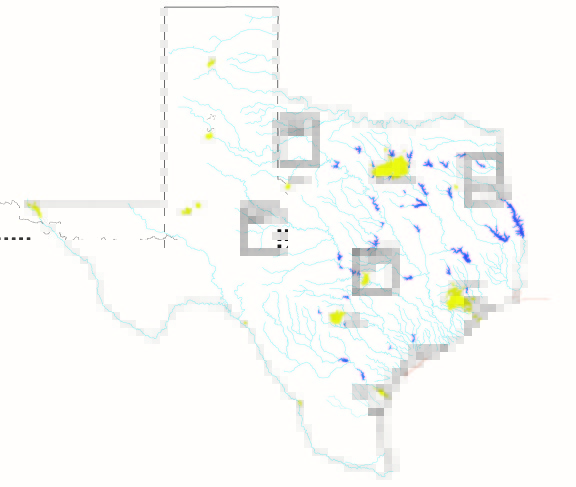 Figure 2. The locations of regions for which evaporation data are collected by the Texas Water Development Board as depicted on Figure 1.

While those losses from reservoirs represent a real and tangible cost in terms of human water supply, they also represent a very significant loss of water that would otherwise support the aquatic habitats and wildlife of Texas. Not only do all those man-made dams disrupt the natural patterns of flow in a river, and not only do humans then use much of that water stored behind the dam, we also lose a bunch of it to evaporation because of the increase in exposed area in reservoirs.

Here is a specific example to put things in perspective. According to water use data from the Lower Colorado River Authority, over the last five years (2009-13),  the annual average evaporation from five of the Highland Lakes on the Colorado River (Lake Buchanan, Inks Lake, Lake LBJ, Lake Marble Falls, and Lake Travis), was a tad more than 159,000 acre-feet (nearly 52 billion gallons). That’s equal to 97% of the City of Austin’s total average annual use during that same period; uses that include municipal, commercial, and energy generation. In other words, the same amount of water has been lost to evaporation each year as is used annually by the 11th largest city in the US. During the record-breaking year of 2011, evaporation from those reservoirs was 25% higher than Austin’s total use. In 2011, if somehow the water lost to evaporation from the Highland Lakes was instead sent downstream, the record-low freshwater inflow volume to Matagorda Bay would have nearly doubled, and perhaps offset some of the drought-induced damage to Texas’ oyster reefs. That volume might have been enough to sustain the oyster reefs and the economy that depends on them, and avoid the high levels of parasites and disease infection due to high bay salinities resulting from low inflows.

Unfortunately, Texas water planners envision even more reliance on man-made surface water reservoirs. For example, the 2012 State Water Plan includes Cedar Ridge Reservoir—a recommended dam/reservoir project near Abilene on the Clear Fork of the Brazos River (in region 408 of Figure 2). Figure 3 illustrates the deleterious impacts of evaporation on a potential reservoir at this location. This figure compares the fate of all water that could be captured in this reservoir based on a long-term simulation with a Water Availability Model (WAM) for the Brazos River Basin. The WAMs, available for all Texas rivers, simulate the storage, water level, and evaporation of existing and planned reservoirs if the actual weather and stream flows of the historical period were to repeat. This particular WAM has been updated to cover the period 1940-2006. For this proposed new dam / reservoir project, of the captured water, a whopping 41% would be lost to evaporation over the long-term. The water that would be lost to evaporation represents a permanent loss from the river system that is no longer available for either human use or maintenance of fish and wildlife resources.  Nearby tributaries of the Brazos River already have fish species that were recently added to the Federal endangered species list. 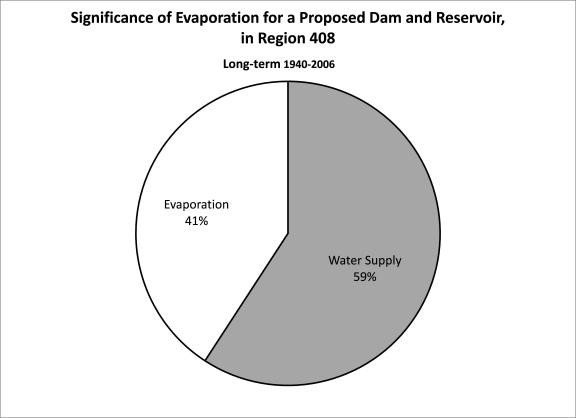 Figure 3. Illustration of the long-term (1940-2006) fractions of water lost to evaporation versus that made available for human use in a surface water reservoir located in quadrat 408 as recommended in the 2012 State Water Plan.

Of course, our concerns about these large losses of water due to evaporation, the wisdom of surface water reservoirs generally, and the wildlife impacts of these choices, are all shaped by the experience of the severe drought most of Texas has endured of late. Maybe we are just all bent-out-of-shape by the drought; it’ll break and things will return to normal – right? That’s not what climate scientist are warning us about the future – more on that in my next installment.

Norman Johns
Water Resources Scientist at National Wildlife Federation
Norman is the man behind the numbers at NWF. He performs analyses of the possible impacts of changes to our rivers on the aquatic life in the river and at the Texas coast. When he's not crunching numbers or making these results understandable to the public, the press, and decision makers, Norman increases his outdoor time by bicycling to work and is an avid camper and traveler.

Motivated by Deadlines? Here’s One for You: Sept. 1