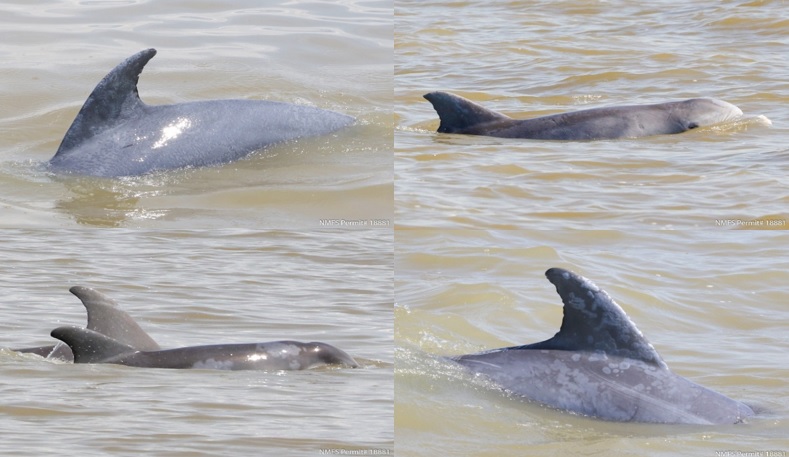 Hurricane Harvey was the wettest hurricane ever recorded to have made landfall in the continental United States, as rain accumulation peaked at 51.88 inches. Fresh water inundated Texas waterways and upset the balance in estuaries like Galveston Bay, impacting many different wildlife species – including bottlenose dolphins.

Because the brunt of the rainfall took place on the Texas coast, Galveston Bay received an unprecedented volume of freshwater through its watershed.  Not only did the freshwater drastically change the salinity of the Bay, but it also likely contaminated the Bay with waterborne pathogens and toxic chemicals. Consequently, in addition to changes in prey availability, the two most pressing issues surrounding the health and ecology of bottlenose dolphins (Tursiops truncatus) inhabiting Galveston Bay during this event were their inability to tolerate a prolonged bout of very low salinity and their exposure to contaminants in the water.

In the wake of the storm: 10 days post-Harvey

During the first week of September, roughly ten days after the rain from Harvey ceased, the Galveston Bay Dolphin Research and Conservation Program (GDRCP; a joint effort that includes Texas Living Waters Project’s regional partner, Galveston Bay Foundation) was able to conduct its first post-storm boat survey in Galveston Bay.  The research crew found few dolphins in the upper Bay, and traveled south in search for more.  The absence of dolphins in most of the upper Bay region contrasted with observations from previous years during the same time frame and to the weeks preceding Harvey, when dolphins were seen in high numbers throughout the study area (Figure 1).  The crew recorded salinity levels as low as 0.27 parts per thousand (ppt) in the upper Bay, compared to a range of 6.19ppt to 14.14ppt recorded in the year preceding Harvey. Unsurprisingly, dolphins had likely traveled south and into the deep waters of the Houston Ship Channel (HSC) to seek saltier water.

When the crew found dolphins in the HSC near the middle of Galveston Bay, they were not engaged in commonly observed activities, like feeding, socializing and bow riding, but were instead traveling slowly south. Additionally, many dolphins were observed with skin lesions covering part or much of their body (Figure 2) and a few were noted to have signs of malnutrition.

Weeks after the storm

In mid-September, the GDRCP surveyed the Bay again in search for dolphins.  Most dolphins were still in or near the HSC.   Overall, the dolphins did not appear as lethargic and were engaged in more “normal” behaviors.  However, the skin lesions were widespread and there were still signs of malnutrition and/or poor health.

The GDRCP recently received two grants (from the Gulf of Mexico Alliance and the SeaWorld & Busch Gardens Conservation Fund) to continue its research on how Harvey has impacted the dolphins of Galveston Bay, and will continue post-Harvey monitoring for at least the next year.  As of December, many of the GDRCP’s cataloged dolphins have been sighted in or near the study area and overall the population has shown signs of recovery. Increased efforts continue to closely track if, when, and which dolphins return to upper Galveston Bay, the presence of calves, long-term changes in distribution, and the development of the skin disorder and possibly other health conditions.

Living in a busy, industrial estuarine environment introduces many risks to bottlenose dolphins in Galveston Bay.  They appear to be particularly vulnerable when multiple stressors from an event, such as Harvey, converge on top of the challenges they already face daily.

During the past few years, GDRCP researchers have observed skin lesions on some individuals following heavy rain events. These lesions could be caused by extended exposure to very low salinity and/or exposure to pathogens and chemicals from toxic runoff (the notably low salinity may initially cause electrolyte imbalance and physiological stress, making dolphins more vulnerable to contaminants and pathogens also associated with the run-off).  The GDRCP has been compiling data on these skin lesions and has been working in collaboration with the National Marine Fisheries Services and other programs on the Gulf coast to better understand their causes and significance.

While many questions are yet unanswered, the GDRCP’s preliminary observations following the storm suggest that the Galveston Bay dolphin population reacted to the rapid and extensive changes in water quality that occurred in the Bay post-Harvey.  The research on these impacts will be vital for the establishment of sound conservation management plans for Galveston Bay dolphins.  These studies are critically important, considering: 1) the predicted increase in the frequency of intense storms due to climate change; and 2) proposals to build a floodgate system that may affect the hydrology of the Bay.  Catastrophic events and/or new structures may lead to imbalances in the Bay that have the potential to be detrimental to the health and ecology of resident dolphins.

As long-lived apex predators, dolphins are an ideal species to serve as sentinels of estuarine ecosystem health and sustainability. Because their survival and health can represent the choices our society makes in caring for estuarine systems, this charismatic, protected species can act as an indicator and ambassador to promote stewardship of the Bay.

Water heroes: Dr. Andrew Sansom wants you to put a kid on the river