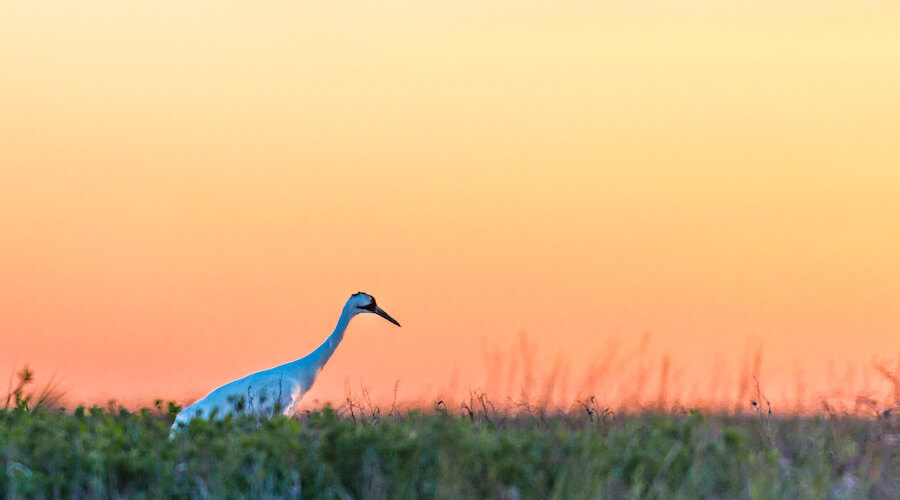 You haven’t truly seen a whooping crane until you’ve wandered onto the wetlands where they winter. The horizon is just a bit bigger there. Salt-marshes and ribbons of water unfurl endlessly in front of you, breathing easy behind the comfort of a seemingly impregnable line of barrier islands in the distance.

This—the Aransas National Wildlife Refuge on the Mid-Coast of Texas—is the only winter home of the only wild flock of whooping cranes on the continent. Perhaps it’s no accident the flock chose Texas. Everything about the crane is larger-than-life and stubbornly unique. Its elongated legs and neck make it the tallest bird in North America; it tops its bright white torso with a flamboyant, deep red cap; its call is a cowboy-esque howl that’s more than a tinge mournful.

The flock feasts off of blue crab, fish, clams, insects, and many other forms of life teeming in the productive waters of the Mid-Coast. The region is an ecologically unique transition zone with a combination of fresh and salt wetlands, estuaries, and bay systems. To protect these natural features and the many benefits they provide, key stretches of the Mid-Coast have been set aside as National Wildlife Refuges (NWRs) and Wildlife Management Areas (WMAs).

Yet while everything from the protective islands on the horizon to official park signage suggests this stretch is indeed a refuge—new analysis indicates climate change could bring significant disruption to the whooping crane and other key species on the coast.

The report from the National Wildlife Federation’s Texas Coast and Water Program argues decisive action can and should be taken to better protect the ecosystems of the Mid-Coast from accelerating climate threats. Here we take a look at four key species to illustrate the challenges facing wildlife and their habitats on the shores of a unique, yet changing, coast:

Coastal prairies in the Aransas NWR provide habitat for federally listed species such as whooping cranes. From fewer than 20 birds in 1941, the 2019-2020 winter marked more than 500 whooping cranes at Aransas NWR. Projections indicate a higher than global average increase in the relative sea level rise in the Mid-Coast region due to land compaction caused by oil, gas and groundwater extractions.

Rising sea levels and subsequent saltwater intrusion will convert more than 50% of the freshwater wetlands to open water in the region by 2100. In addition, increasing temperatures and decreasing salinity in Mid-Coast estuaries is a threat to young blue crabs—the primary food source for whooping cranes. These combined findings suggest the whooping crane could lose its only wintering home before the end of the century.

Migratory waterfowl in the Mid-Coast are dependent on the marshes of Big Boggy NWR, Guadalupe WMA, and Mad Island WMA. Storm surge will intensify due to the projected increase in sea level rise by the end of the century. Research also suggests that severe storms such as Harvey will become more frequent in the future leading to flooding and erosion of the birding and nesting sites for these waterfowl. Climate change will also lead to new areas becoming susceptible to storm surge including Mad Island WMA, a crucial wetland habitat for wintering waterfowl.

The beach and dune system of Matagorda barrier islands in the Mid-Coast provide nesting grounds for Kemp’s Ridley sea turtles—the smallest sea turtle in the world and an endangered species. Surface temperature plays an important role in determining the sex of hatchlings for Kemp’s Ridley sea turtles. NWF’s analysis indicates the number of days above 95 degrees Farenheit in the region will almost double by the end of this century. Higher temperatures can lead to a low nest success and affect sex ratios with producing only females for these endangered sea turtles.

Southern Flounder is among several commercial and recreational fisheries found in the Mid-Coast’s Guadalupe Bay and Matagorda Bay. Increasing temperatures and declining freshwater inflows from the Guadalupe-San Antonio River basin and Colorado-Lavaca River basin is leading to a decline in salinity for Mid-Coast estuaries and bays with negative consequences for their fish population. A study analyzing the distribution of 150 species across the coast of Texas found a decrease in occupancy probability of Southern Flounder with salinity and sea level rise as primary drivers.

NWF’s study offers a range of policy recommendations that could help combat emerging threats and build resilience across the region. To protect the key species discussed above, the report suggests decision-makers:

The threats facing these four species illustrate the scale and complexity of climate-related change on the Texas Mid-Coast. To conserve wildlife and habitat in this changing context it is critical that we invest in these treasured ecosystems this decade. Many of us, whooping cranes included, have found a refuge in this big corner of the world—let’s fight to keep it that way for our children.